BEER ROOM, the name evokes many images. It can be an old refrigerator in the garage or on the porch. How about the floor of your closet? Or better yet, how about the whole closet in a spare bedroom? If you are lucky, like me, and have an understanding bride, you might get the whole spare bedroom. Having a Beer Room comes with responsibility, especially when it comes to storing beer that requires extended aging. Sunlight is the nemesis of beer, so keeping light and heat off your reserve is critical. When ultra violet rays strike your delicate stash of brews, they interact with the acidic hop compounds called humulones. This creates a nasty chemical reaction which produces a noxious chemical similar to the stuff a skunk sprays when it’s frightened… hence the term “skunky”. This is often a sign of a “light struck” beer. 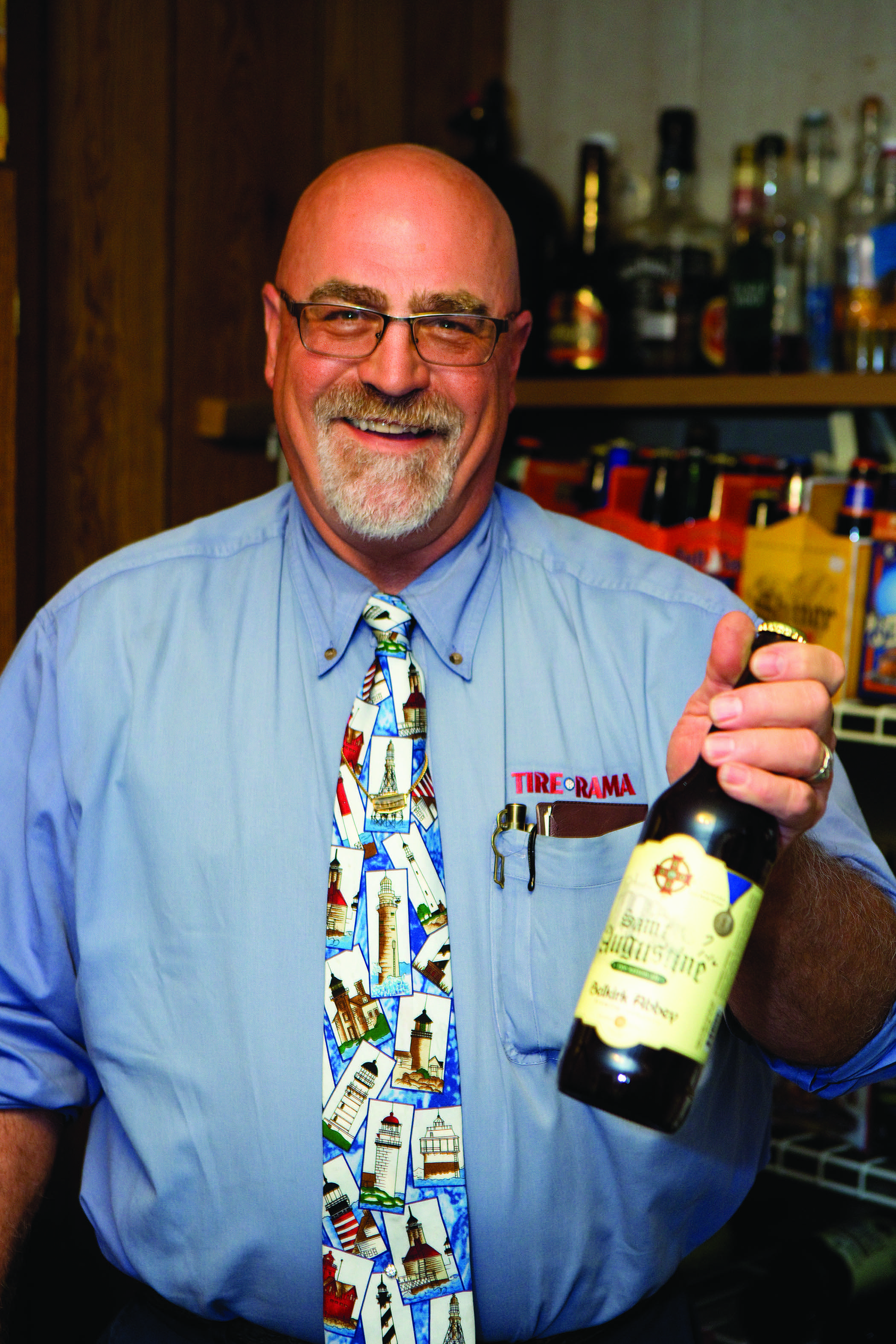 Temperature fluctuations from extreme cold to extreme hot will wreak havoc on your beer. The best to store are the dark bottles. Clear and green bottles allow in significantly more UV light than the brown but, they can still be stored, just keep them in a closed up box. The higher alcohol and darker beers will store or lay down better than the lighter brews. I just opened some 2005 Big Foot Barley Wine that clocks in at 9.9% and it is wonderful! And, always store beer upright. Yeast is critical to beer, but the sediment it leaves behind has a way of ruining the flavor. Keeping them upright allows the yeast sediment to settle at the bottom of the beer. Decades ago, when I began storing beer, I just stacked it in a corner on the floor. The light was hitting it at various times of the day and the temperature was up and down like a yoyo. I smartened up a bit and moved it into boxes and stored them on the floor of a closet. This worked much better as the temperature was fairly even and no natural light got to it. The only problem… I ran out of room. I patiently waited until the kids were out of the house and sweet talked my bride into half of a spare bedroom. I worked my way up to three quarters and eventually, I got the whole room. I’ve since placed a room darkening shade on the window complete with a nice beer themed inner shade for a touch of character. The in-room air conditioner runs 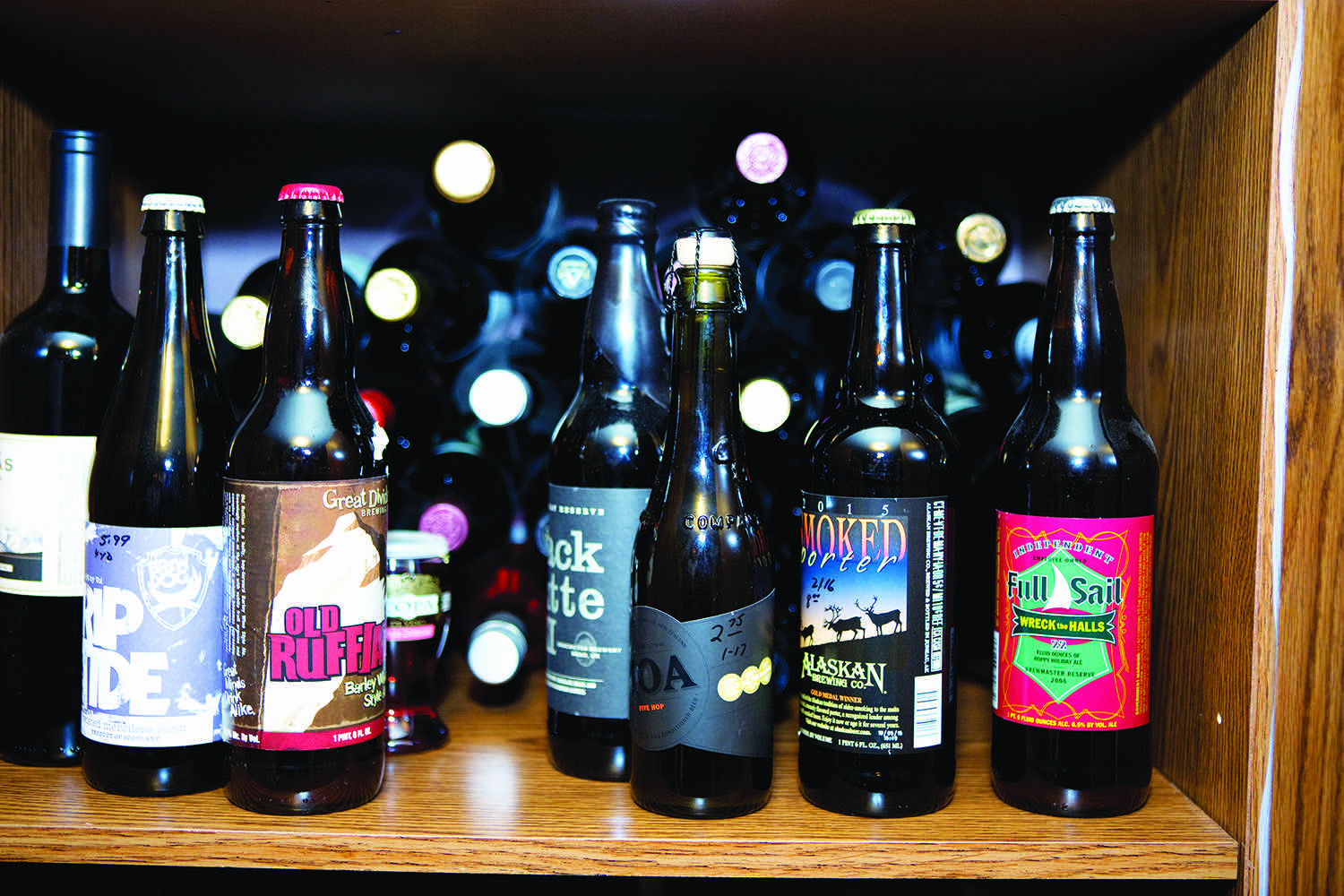 24/7 365 days a year and maintains a 55 to 65F range. It has one low watt single bulb and a door draft dodger on the outside. I recently discovered the COOLBOT. This device allows most air conditioners to go lower than the set temperatures but only works on a select few. A new AC unit is on the wish list. My next step is to move the beer room/brewery into a shed in the back yard as my bride would like the bedroom back. All I lack is time and money, no problem right? I guess it is time to go, oh look, I just found a 2007 Alaskan Smoked Porter, Dear God, I love this room! – CHEERS, Beer Man

King of the Kitchen

The Genius Behind the Backyard Sipper Revealed

We are going to switch gears this issue. Instead of zeroing in on flavor, color and alcohol content, let’s explore the various uses of my good friend, beer! It’s a no-brainer that you can cook with it but, have you ever thought of making vinegar? I stumbled upon this tasty concoction when a batch of home brew went sour and I, being a frugal individual, didn’t throw it out but rather, made vinegar. I grabbed a gallon glass jar and added some organic vinegar to my messed up brew. (Be sure the vinegar is not distilled, filtered or pasteurized.) This will inoculate it with some good “bugs” or what the pros call acetobacter. Acetobacter is aerobic, meaning it needs oxygen to convert ethanol (alcohol) into acetic acid –which makes vinegar taste like vinegar.

New Year’s Inspirations for the Chilly Months Ahead

We’ve said goodbye to 2016 and hello to 2017. Many have set the bar high with resolutions for the New Year, and of course many of those call for cutting back on the things we love. That’s all fine and dandy but there is one thing I will not be cutting back on and that is BEER! I do however resolve to broaden my horizons by opening my palette up to new brews. Let’s kick off the New Year by checking some great winter warmers off the list.

Poppin’ the Top on Some Great Craft Brews

The hop-obsessed craft beer industry keeps getting better and better. New breweries are popping up across the state and established breweries continue to flood the shelves and taps with new beers from traditional styles to intrepid uses of creative ingredients and techniques. 2016 is already chock-full of new brews garnering loyal followers. The genius to craft brewing is continually finding new ways to showcase hop flavors from both classic and modern varieties. Finding the perfect balance in spirit barrel-aged brews as well as the addition of fruit to any beer continues to be a popular trend amongst breweries as well.

Craft Brewing at its Finest in Central MT

If you follow my column or you are just tapping in, there is one thing that’s clear –I love beer! Not just any beer… I love craft beers! You might even say I’m a bit of an artisanal snob. Acquiring this status didn’t come over night. I went through years of the mass produced stuff… Bud, Miller and the likes but, when the craft beer revolution began, I dove headfirst into the thick, dark, hoppy beers and never looked back. Don’t get me wrong, I’m not above accepting a lawn mower beer if offered but as good brew masters have refined their recipes for good beer; I too have educated my palate in quality, taste, uniqueness and the creativity of these flavorful libations.

This issue, we are heading to the Mighty Mo for a peek at its offerings. “The Mo”, as the locals refer, is located in the middle of downtown Great Falls. This cleverly renovated historic brick building boasts a fun and casual atmosphere with food that compliments the heart, soul and passion that is poured into every batch of beer they brew.

The Mo has its keepers and its seasonals (catch and release). Dam Fog is American Hefeweizen, and is named after the fog like mist the Great Falls of the Missouri produces when the river is flowing hard. It checks in at 5.0% ABV and 20 IBU’s (International Bitterness Units – the bitterness rating of beer). Rising Trout is a West Coast style Pale Ale that comes in at 5.4% ABV with an IBU of 49. The Rendezvous Red is an American Amber/ Red Ale. It pours a garnet red with a thick creamish tan head. The Lip Ripper is an IPA that pours a nice cooper color and checks in at 6% ABV and 33 IBU. The Smoke Jumper is a fine representation of a Scottish Ale. Checking in at 6.4% AVB and 21 IBU’s, it’s a definite palate warmer!

On the catch and release list, the Mr. Brownstone, an Oud Bruin (Old Brown), is a style of beer that requires a long aging process allowing the residual yeast and bacteria to develop a sour flavor. It checks in at 5.6% ABV and at 20 IBU’s. The Motorboat Apricot Wheat Ale is the perfect summer quencher. Checking in at 5% ABV and 20 IBU’s, this American Pale Wheat Ale offers great flavor with a very clean finish.

Check-in next issue as we continue our tour of breweries in Central Montana. In the meantime, forego the bland, flavorless, watered-down idea of a desirable beverage and embrace the ever-growing, constantly-evolving group of craft beer enthusiasts right here in central Montana. I promise you won’t be disappointed!

Spring has sprung and it’s time to transition into some crisp and refreshing brews. To kick off the season, I have rounded up some beers to help power through those spring chores or perfect for sitting back and relaxing with friends on a sunshiny day.

Craft beer is all about diversity, which is reflected in the assortment of beer styles produced by breweries during the spring season. Let’s kick things off with Saison (seh zohn) and Session beers. Saison, French for season, is a pale ale that is generally around 7% ABV (alcohol by volume), highly carbonated, fruity, spicy, and often bottle conditioned. Historically, in the 15 and 1600s, they were farm house ales made in the cooler winter months and stored for summer use when the seasonal workers came to work the farm. These workers were called Saisonniers and were entitled up to five liters of beer every work day. Remember, in those days, water harbored bacteria and fermentation was a sure way to eliminate the risk. Back then, no one kept track of the ABV, but most agree they were probably 3 to 3.5 percent evolving to 4.5 to 6.5 in the early 20th century. Today, you are more likely to find them between 7 and 8.5 percent. Saison is generally a Belgium style brew utilizing Belgium style yeast to give it that crisp, fruity and clean finish.