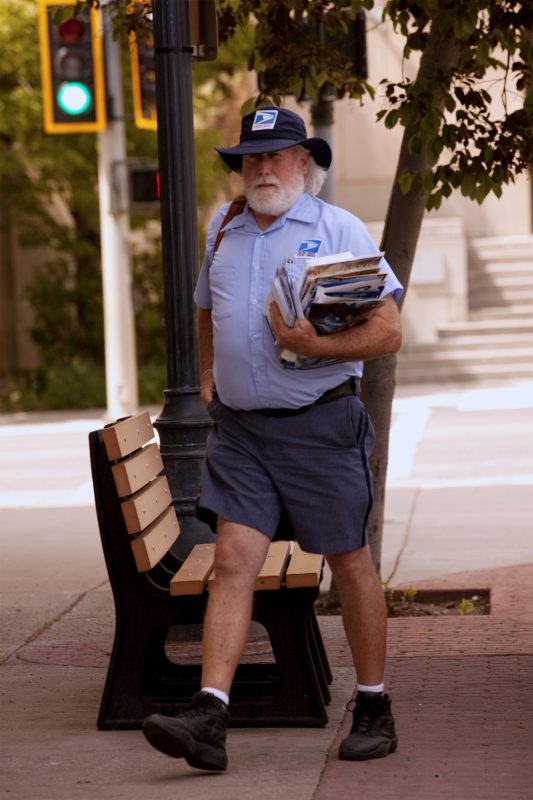 Taking a Hard Job and Making it Look Easy

While “rain, heat, hail, sleet and snow,” can apply to nearly every month in Great Falls, U.S. Postal Service city carriers cannot duck out on the job. Their perseverance, along with that of the assistant carriers and management, has recently earned them a number one spot in the nation.

Peter Nowacki, spokesman for the Postal Service explains that carriers across the nation are ranked, “in Lean Mail Delivery, a process that applies proven management principles to improve service performance and reduce operating costs.”

Alan Serfoss , Great Falls Postmaster, credits, “carriers who have stepped up to the plate and the support and guidance of managers,” with being ranked number one nationally, for the first time.

Jeff Durnell, one of three delivery supervisors, says that all delivery units, which include 70 carriers and assistants who are afoot as well as “mounted” (using vans and trucks), are ranked by a set of internal measurements of efficiency.

“The process we’ve got going now is so right on,” he says, explaining that since the number one ranking was achieved October 1st, 2015, “we’re still sitting number one as of this week.”

“Number one, it’s having the tools to be able to perform the tasks, then to be able to use the tools. Management has to be on the same page with the carriers to implement the process.”

According to Marcus Delgado, a city carrier for 8 years: “There have been lots of internal changes we’ve had to deal with relating to technological changes in order to stay competitive.” For example, he says that carriers can now alert customers when estimated delivery time approaches for parcels.

Part of the, “love of the job,” he says, “is the human element. We’re the first line of information for their questions.” Postal patrons can help, he says, by, “staying informed of policies and changing procedures. Read what you can online and speak directly to carriers when you have issues. If there are pressing issues, don’t hesitate to ask.”

Sue Hastings says she likes to carry mail to a neighbor when it is inadvertently delivered to her 2nd Avenue salon, Razz Matazz. “I don’t know if it’s okay to take this over to him or not, but it gives me a chance to say hello.”

Delgado says this is the type of question postal carriers like to address. (And in this case, while it is okay to get mail to a neighbor, patrons can also write, “incorrect delivery”.) Letter carriers may walk from four to 12 miles a day depending on the route, and thus try to stay focused while saying quick hellos.

Dogs are a risk year round. Nowacki notes that, “May 15th kicked off “National Dog Bite Prevention Week,” which calls attention to one of the nation’s most commonly reported public health issues: dog bites and attacks.” He notes that, “Last year, 6,549 Postal Service employees were victims of dog attacks.”

Seasonal heat and cold also pose challenges along with carrying heavy bags and slips and falls.

Marian and Lew Miller have resided in Great Falls for more than 50 years. They say that they were not surprised to hear that their mail carriers had been ranked #1 nationally for basic efficiency in their work. “That has been our experience in the 52 years we’ve lived in Great Falls,” she says. Speaking animatedly about their fondness for animals, especially dogs, Marian says their current canine companion, Star, is always eager to greet the carriers.

Star likes to greet them with friendly barks and tail wagging, she explains, noting that, “ I always keep him on a leash or behind the door or gate in the back yard when they come.”

“I feel we should respect mail carriers and keep our dogs contained so they are not a danger to them. We REALLY appreciate the job they do!”

Postal customers can also help by addressing mail carefully and by providing correct names on mailboxes. And for a “tip of the day”: When a package pink slip is received in the mail, customers do not need to take it to the post office. The slip can be signed and left for the postal carrier who will deliver it the following day.

City carrier, Keith Kitchin, has a downtown route. “We are under the gun to do a lot of work in a short amount of time,” he says, “which is why we’re the most trusted government organization in the nation.” Factors that have kept Keith at his job for 29 years, as well as making Great Falls, as a city, a great place to work is the, “camaraderie of the carriers,” including the assistants and substitutes. “We enjoy doing public service.”

“We are the last mile,” he says, on the path the mail takes, from the time it is sent, to going to processing centers, to being distributed to routes out to the “territory.” Julie Quilliam, a carrier for 20 years, says the recent national ranking, “is a great honor,” noting that it does not add additional pressure, “since I plan on still doing a great job.” She cites leadership for, “being innovative and focusing on labor relations. We work out problems before they become major issues.”

Julie says she likes the fast pace of the job. “We get paid to exercise and get to be outdoors.”

“The biggest misunderstanding,” she says, “is that we make it look easy but we’re really thinking of the next piece of mail cause we don’t want to make a mistake.” ‘We also want people to know we try to give back to the community,” noting that in the past letter carriers have collected over 18,000 pounds of food for the city. “For some people, we’re the highlight of their day.”