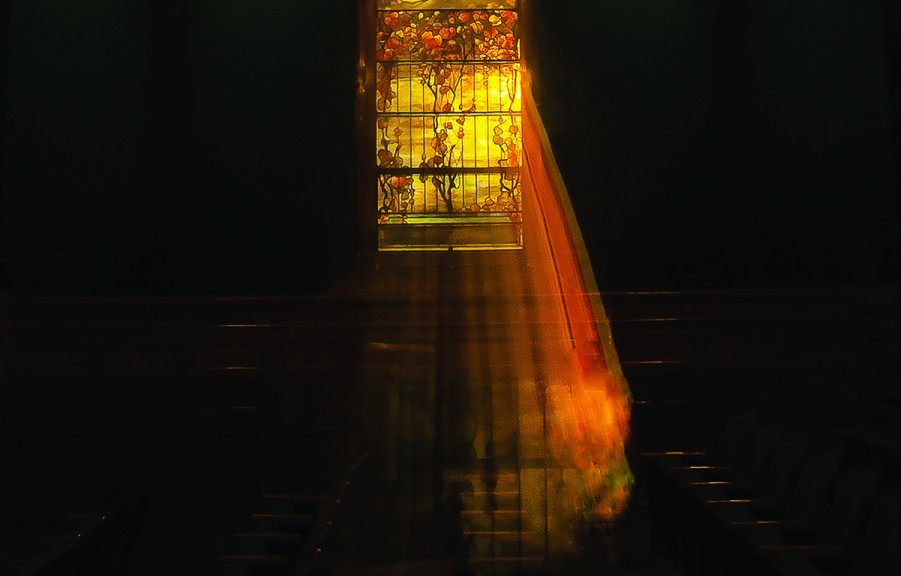 The strange sensitivity of presence. The prickle of aura. The unexplained specter of a protector – a hovering apparition, an unexplainable form of residual energy.

Grandstreet Theatre is one of the most haunted buildings in Montana. Many believe that one of its most enduring and patronizing poltergeists is a woman named Clara Bicknell Hodgin.

“Clara was beloved by the people of Helena,” said Kal Poole, managing director of Grandstreet Theatre. “Many think that she is part of the community once again—in the form of a ghost.”

The lovely brick building in which Grandstreet Theatre resides was built in 1901 as the Unitarian Church of Helena. In 1903, the Rev. Hodgin was hired as pastor for the church and settled in Helena with his young wife, Clara. A former kindergarten teacher, secretary and instructor at institutes in Iowa, Clara promptly endeared herself to its youngsters; her Sunday school soon brimmed with more than 100 students.

Clara had no biological children. Her students, however, were treated as her surrogate sons and daughters. One of her students said that she “lit up the room like sunshine.” As an educator, according to Iowa State Education Association materials, she had “the characteristics of genius possessed by few.”

Unitarians believed that their spaces should also perform civic functions and that the church should be the focal point of community interaction and expression – not only religious, but artistic and educational. Unitarianism is an “open-minded approach to faith” that encourages individual freedom, equality for all and thought based on reason.

“Progressive Unitarians designed the church to double as a public space,” said Ellen Baumler, author of Haunted Helena and interpretive historian at the Montana Historical Society. “Because of this, the sanctuary in Helena also functioned as a public auditorium with sloped seating, a beautiful proscenium arch, and fully-functioning stage.”

In what can only be described as spookily prescient, one of Clara’s favorite projects involved directing her small students in pageants and plays in the sanctuary’s auditorium.

“Club meetings, classes for children, and play rehearsals were held there,” said Poole. “Clara Bicknell Hodgin led many of these activities.”

When Clara died of illness in 1905, she left boxes of ideas on note cards and hundreds of files of future projects.

“She was a person who had this really strong, energetic personality and strong energy,” said Baumler. “If there was ever the kind of person to be hanging around, she would sure be it.”

After Clara died at age 34, members of the congregation commissioned a stained-glass Tiffany window in her memory. Louis Comfort Tiffany was an accomplished New York City decorative artist who lived from 1848 to 1933.

Noted as an atypical example of a Tiffany window commissioned for a church with no religious depictions, this skylight of idyllic illustrations has been the basis of much supposition. The inscription reads: “In loving memory Clara Bicknell Hodgin 1905.” “After her death,” said Pool, “members of the church wanted to show their gratitude for her wonderful work. So they had a stained-glass window made for the building. It showed a beautiful outdoor scene with hills, lakes, and a golden sunset and a nature scene reminiscent of Helena.”

In 1933 when the building was gifted to the city of Helena for a library, the window was removed and packed up. In 1976, the library was moved and the Grandstreet Theatre company took up residence in the old church. Around this time – another eerie coincidence – someone discovered the window crated up in the Civic Center’s basement, and it was restored and reinstalled in the theater. Within days, staff members started seeing and hearing strange things. Odd creaking noises. Quiet whispers. Movements in the distance. Sounds of footsteps in empty corridors. Lights switched on and off, and doors swung open and slammed seemingly by themselves. Even more inexplicable was that an unusual radiance seemed to outline where the stained- glass window dangled.

“It’s a very spiritual thing to me, that window,” said Baumler. “Its appearance changes dramatically with each subtle change in lighting. At the bottom, Clara’s name sometimes becomes unreadable while the upper window remains perfectly clear. The words look as if a childish hand has smudged the paint on the glass.”

Baumler said that she has had her own special encounter with the famous phantom of Grandstreet. It happened at a benefit last Halloween while Baumler was on the stage at Grandstreet sharing stories from her book of haunted tales.

“When I was up on stage, there was this weird thing on the floor, like a black shadow. It was playing around my feet, and I didn’t want to look down too much because people would have noticed that I was distracted. Afterwards, there had been a number of sensitive (too paranormal activity) people who came to the event, and they were all on Facebook later talking about the event. They had noticed a female figure that came down the aisle and stood behind me the whole time I was telling my story. They had also noticed the black floor.”

Many people think that Clara’s spirit watches over the children who participate in activities at the theater. Some have reported seeing a “misty kind of thing” suspended in the balcony. Others have had more unnerving experiences, like the frightened drama teacher who claimed he was sitting near the stain glass window and spotted a sitting figure of a woman.

“Sometimes, the energy is not real positive,” said Baumler. “But Clara’s energy is so strong that it pervades the whole building, perhaps protecting all the kids that come there. It takes the right kind of person who would keep her energy like she does and keep other energies at bay.”

Baumler said that paranormal investigators have visited the building on several occasions but have yet to find “valid proof” of such psychic or telepathic behavior. One longstanding employee said that she had yet to experience any such dealings with Clara or any other lingering spirits.

Brian D’Ambrosio is the author of “Warrior in the Ring: The Life of Marvin Camel,” available Fall 2014 (Riverbend Publishing), and he is currently at work on biographies of Rastafarian boxing champion Livingstone Bramble and Italian-American racecar driver Ralph DePalma (1882-1956).