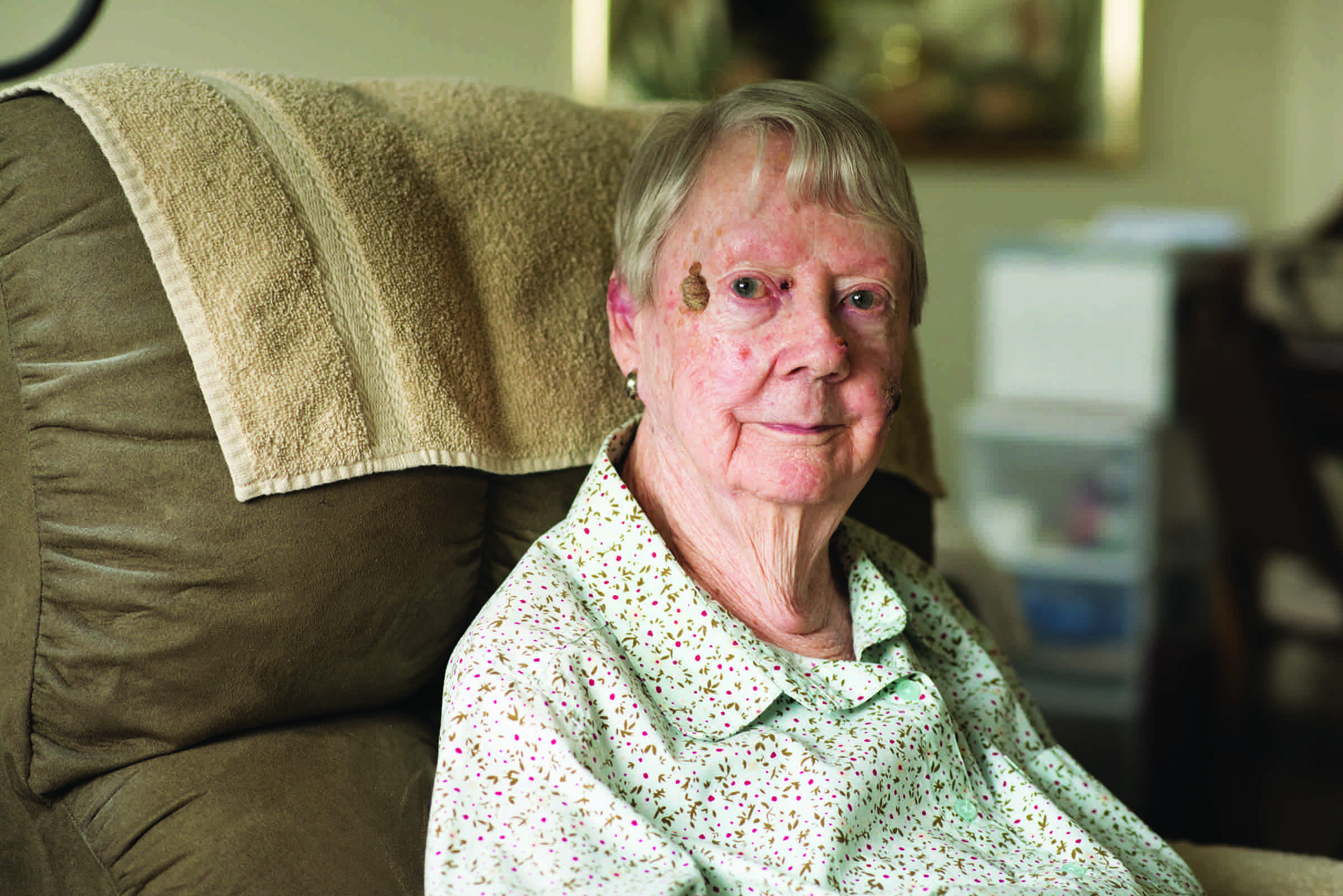 Story Down Memory Lane for Signature Montana Summer 2017 from Polly Kolstad “Everything turned out well,” says Frankie Powell, referring to her life of ninety-two years. Born March 29, 1925, in  Los Angeles, but raised in North Carolina, Powell  calls California home where she attended grade school and graduated from Dorothy High School. Named after her mother, “Frankie,”  Powell is thankful for life.

She met and married Charles E. Powell, Jr., in 1943 when they both were going to riveting school. They were married in Mississippi but worked together in Leavenworth, Kansas until World War II ended. They moved back to Inglewood, California, and went to work for North American Aviation as riveters. According to Powell, riveting was a big factor in WWII.  Many women were employed as riveters. She reaches for a picture of herself, a beautiful young woman dressed and ready to go to work as a riveter.

Rosie the Riveter became the female icon.  She was depicted in pictures.  She was the likeness of so many women doing this work because men were involved in the war. 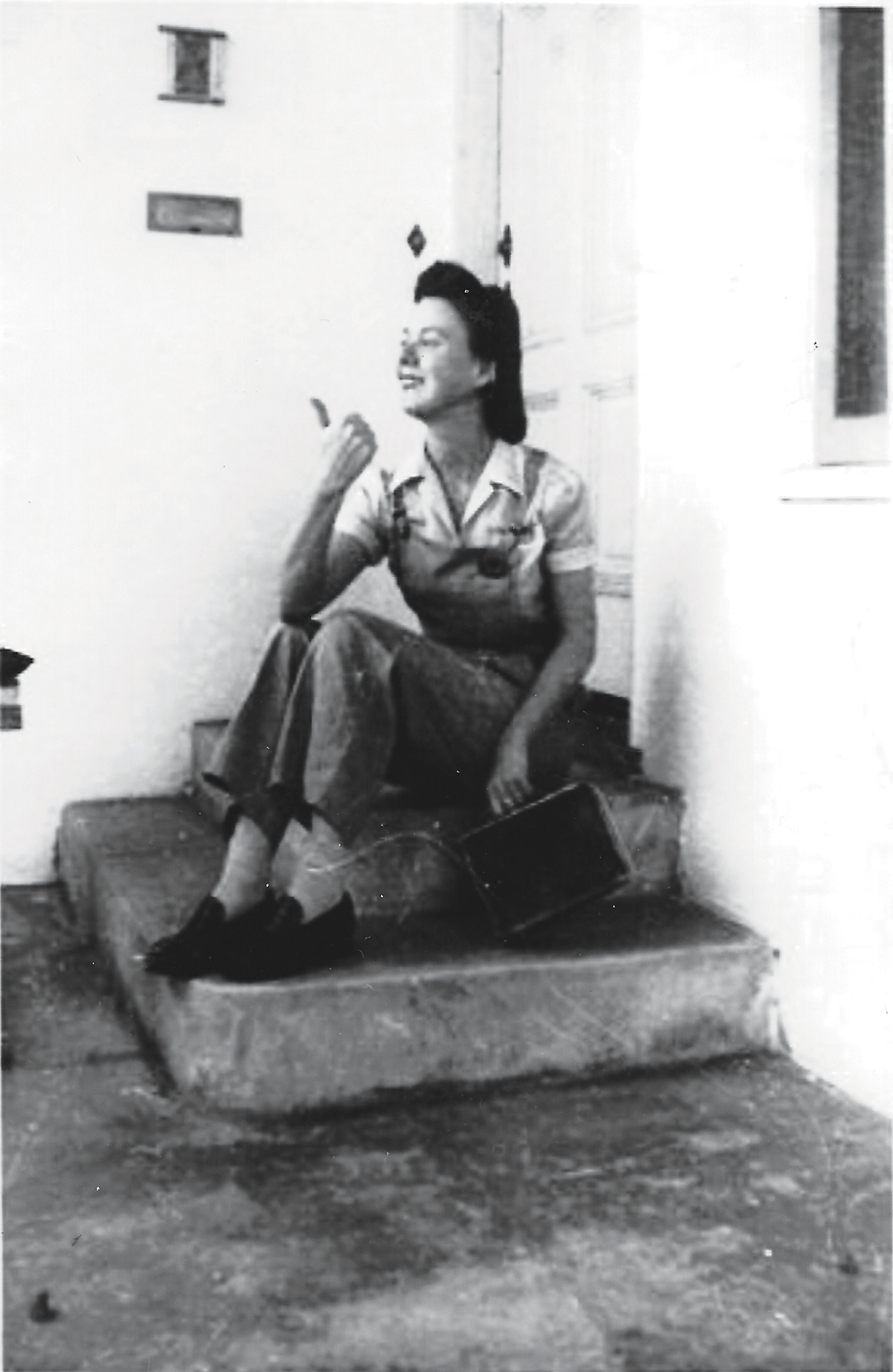 “The P51 is one of the best planes they put on the market; the B25 bombed Tokyo the first time.” When WWII was over, her husband continued to work for North American Aviation which wasn’t far from LAX. Powell didn’t drive until after WWII.

“So many people at that time “pooled;”  four of us went to work together. We didn’t have transportation, gasoline, cars; everything was rationed.” They were allworking for a cause and it was to be expected they wouldn’t have the luxuries they had before  the war.  That was the way it was. “When you go through war, things change in thinking, attitude and way of life.  That’s war.  Let’s hope we don’t ever have to go through that again,” she exclaims.  “People wouldn’t know what to do.”

The aviation employment was a good wage in those days, with benefits.  They tried to keep employees. It was the first time in Powell’s life that she had worked. Then, WWII stopped, she got married and came home. After the war, Powell didn’t work but her husband continued with North American.  He was an engineer.  They moved around with his job, living in many places in California. They had four children: three sons, and one daughter.  One son, lives in Choteau, a daughter in Sweet Home, Oregon,  a son in Corvallis, Oregon, and a son in Loveland, Texas. 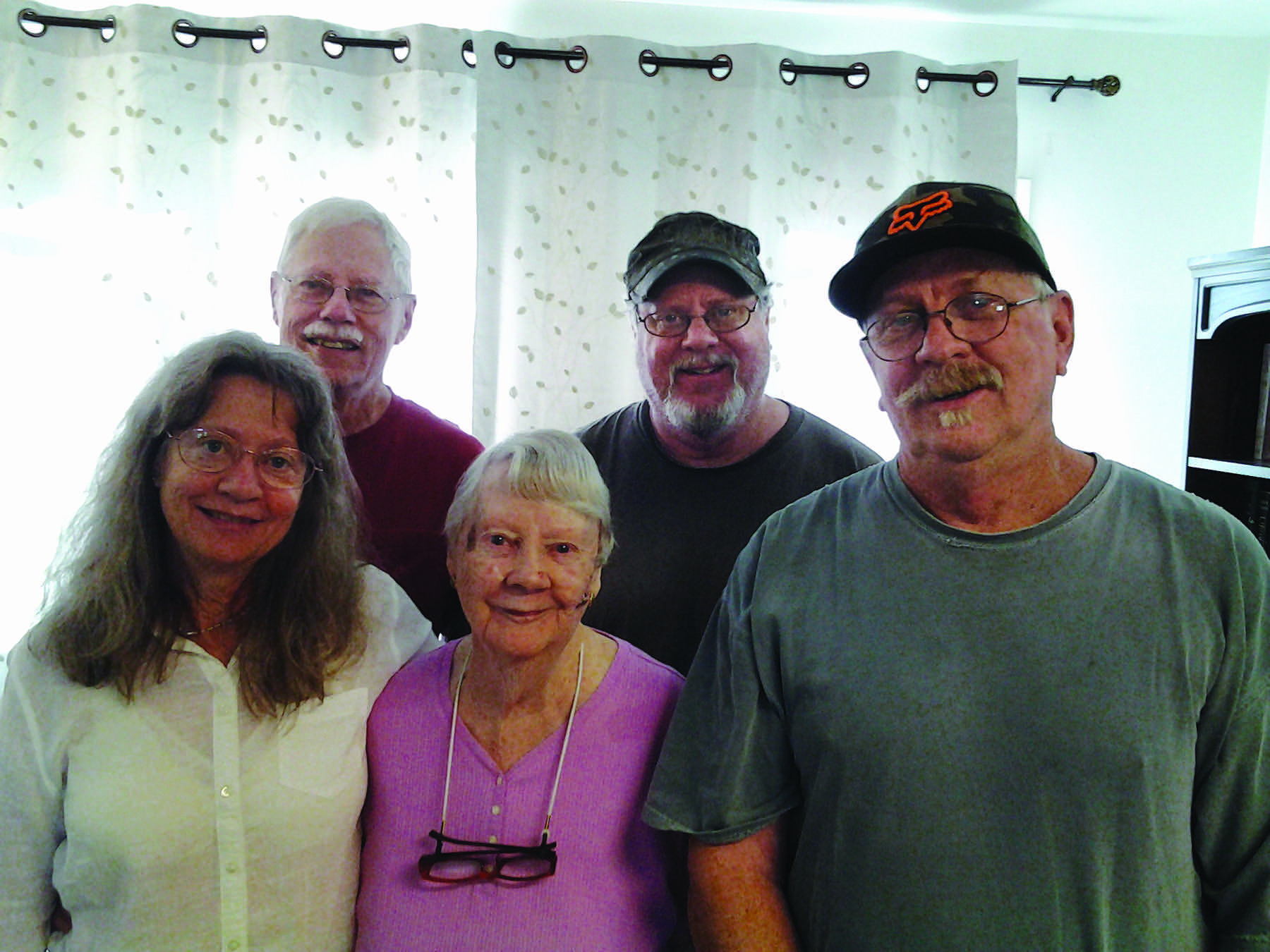 “Let’s hope we never have to go through a war again,” exclaims Frankie Powell.

All four children have military service connections. They represent all branches of the military family:  Army, Navy, Marines, Air Force. 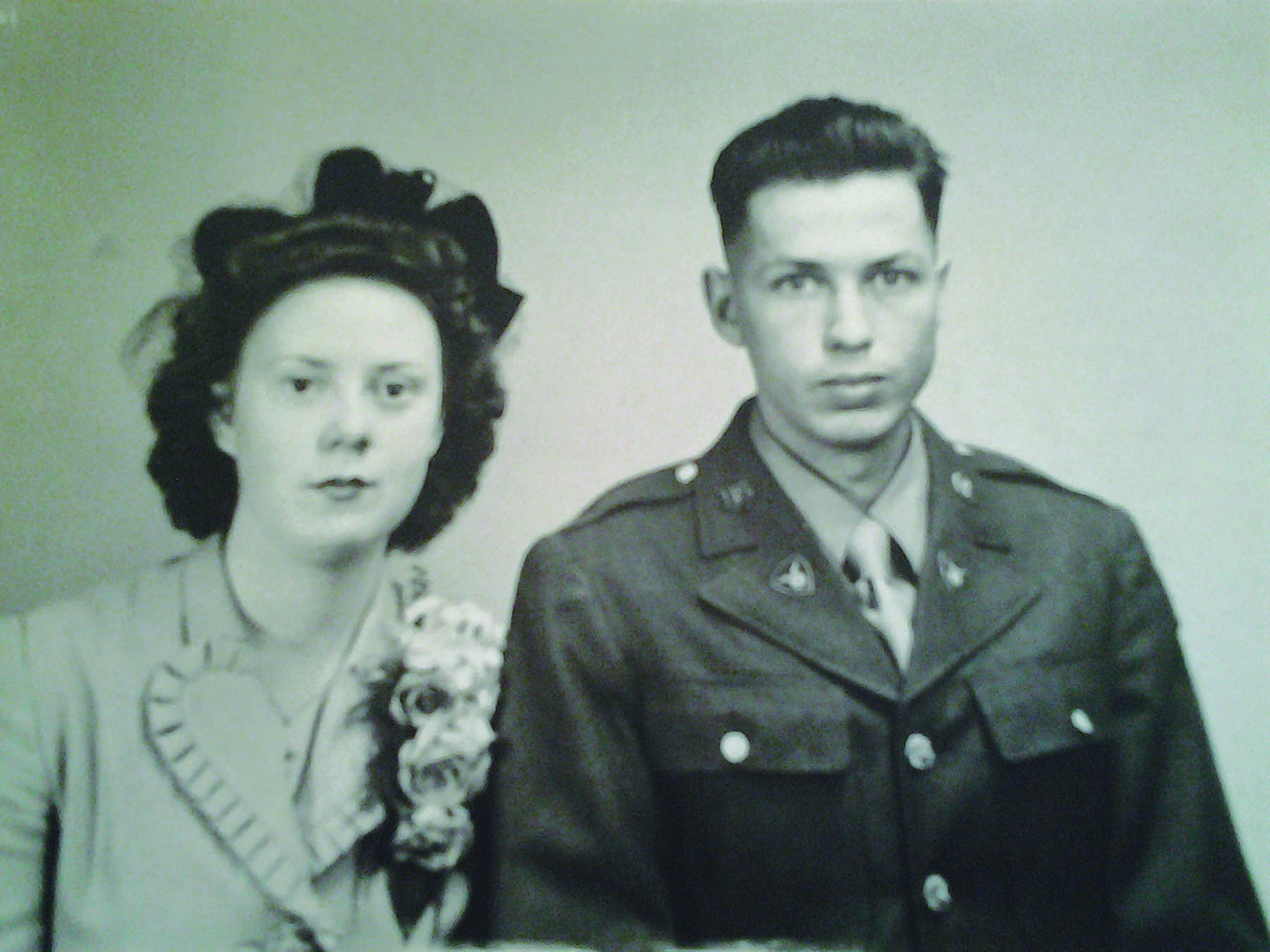 “I’m very proud of that,” she admits. Powell moved to Montana in 1980, settling in Big Sky, where her husband had invented something, “a solar system,” she calls it.  Eventually they moved to Ohio, then, to Bozeman, where he died.  As a widow, she came back to live in Choteau where her son is employed by the postal service. She describes raising a family as the best part of her life. “We had two children and then, nine years later, we had two more.” Powell has had relatively good health, “a few things, but normal; I’m thankful.” She has seen a lot of change in the world with computers, and television.  Her first TV she bought right after WWII.   It was a black and white,  and small. “TV has taken over a lot of people’s social lives,  she laments, “where we used to visit, people now sit and watch TV.”

Powell enjoys living at Skyline Lodge in Choteau.  They have community involvement; coffee breaks, and she gets to meet a lot of people.  She has been there for two years. “Today, my favorite thing to do is “just relax.”  As kids say today, “kick back.” “We all try to do well, there is comaraderie here; we understand each other.” Retirement suits Powell. “I’m thankful I’m at that point in my life.  When I get up in the morning, I thank the Man upstairs.  I’ve had a diversified life: ups and downs;  but you learn from the downs.” And then, she pauses. “My big thing is: I was a California Beach Girl. I enjoyed tremendously being out in the sun constantly, but now, I’m paying for it with skin cancers.” 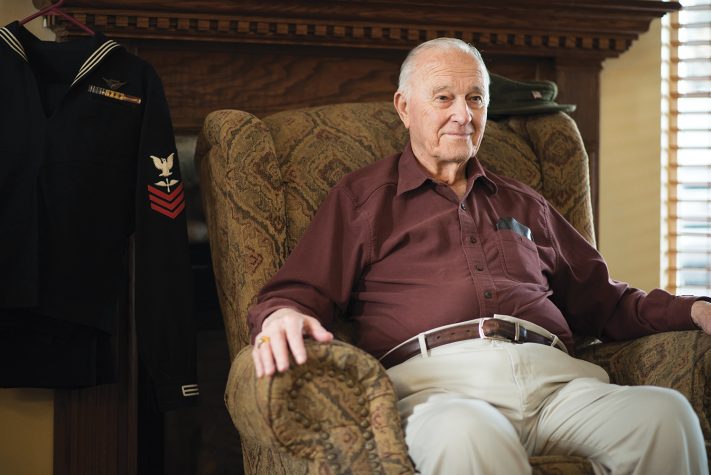 It has been a few years since Edward Anthony Maierle was employed at Fligelman’s Department Store in Helena, Montana.

He was working there December 7, 1941, the day Pearl Harbor was bombed. He immediately enlisted in the U.S. Navy and flew to Hawaii to become an “Avenger” (American torpedo bomber World War II) stationed on Pearl Harbor. 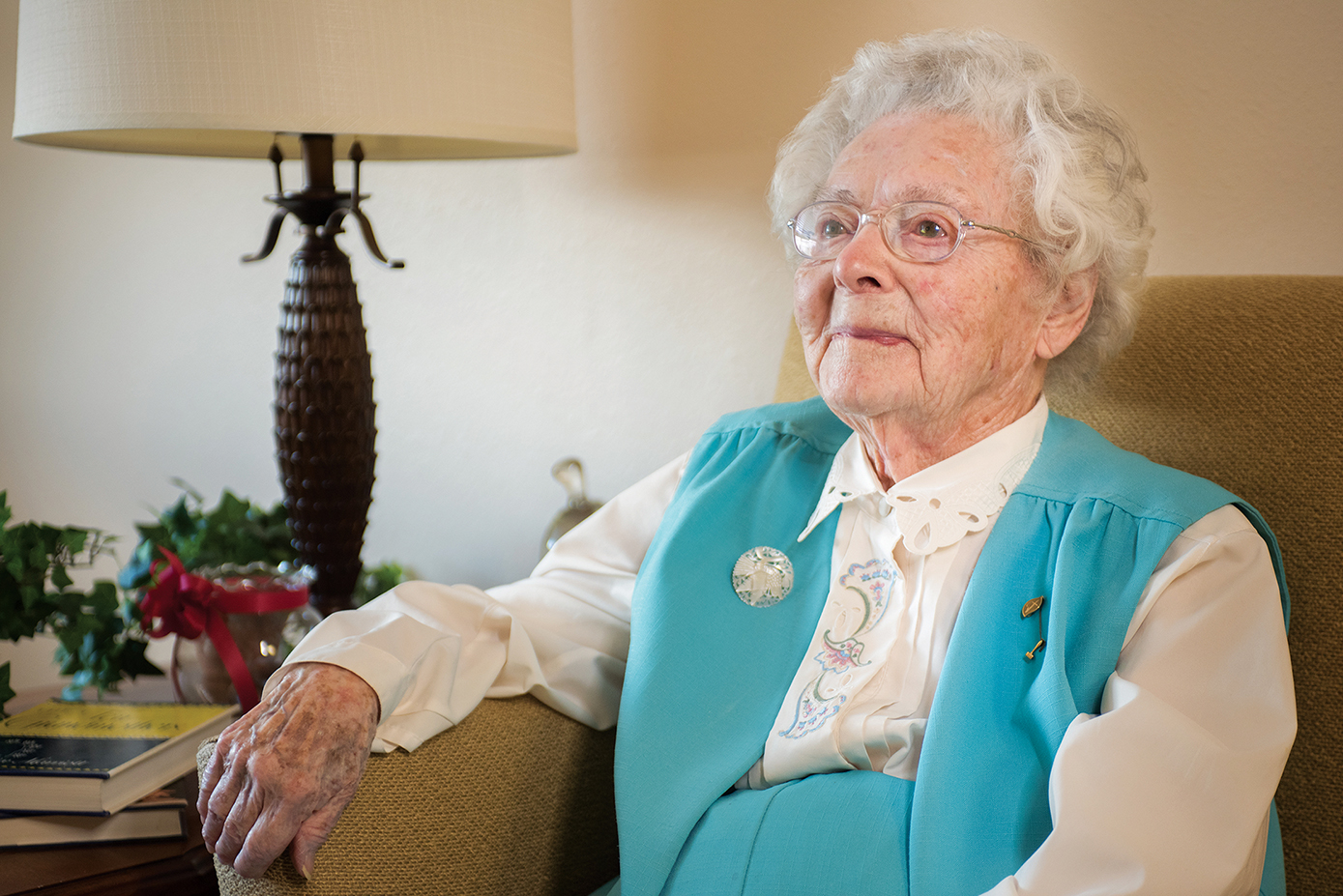 At the golden age of 102, Geraldine Paulus still has something to give back to life.

“I don’t know why I’m so special. It’s just that all of my life I’ve been involved with people and traveled a lot,” says Geraldine (Gerry) Paulus, a sprightly silver haired lady, quietly engaging conversation.

Born on a homestead out of Collins, Montana, over 100 years ago, Geraldine (Gerry) Paulus remembers when there was no electricity, no running water, and no telephones.

“I’m from Choteau, born on a homestead out of Collins, 102 plus years ago.”

Paulus lived for a short time in Nebraska. Then, the family came back to Montana when her grandfather passed away and her father took over the farm near Choteau so she and her brother could go to high school. She attended Western Montana College for two years and became a school teacher out of Power. 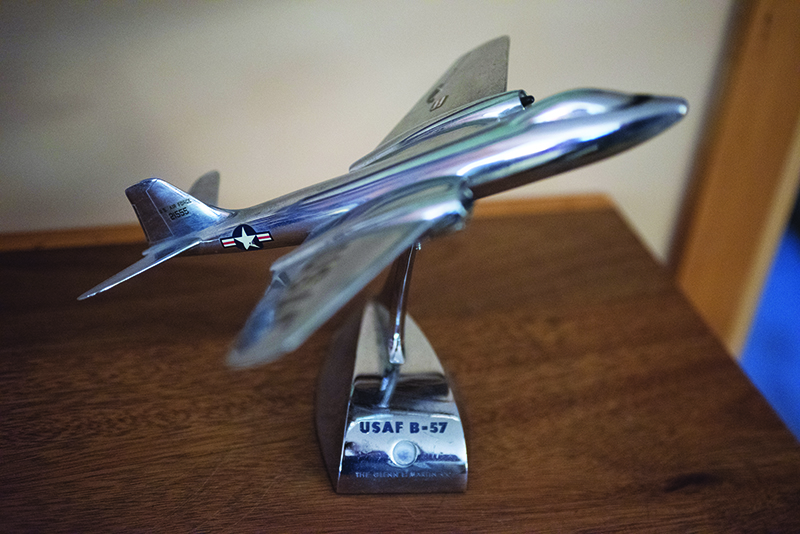 A Mission to Fly

Pilots Recollection of the Cold War

Text by Dwayne Nelson and Photography by Jesse Martinez 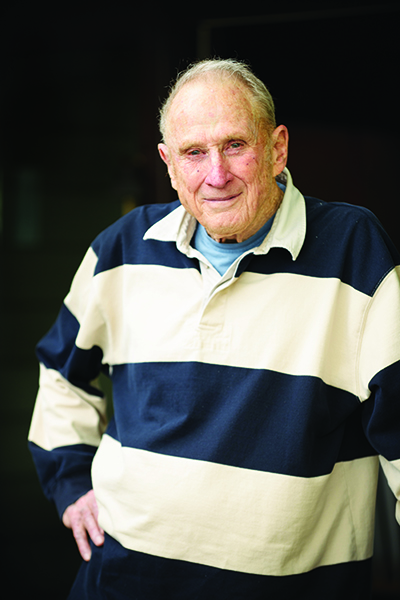 “As an officer I felt it was my obligation to serve our Country in Vietnam so I requested assignment to a highly classified operation.”
– retired Air Force Colonel, Lee Mongeon

When the atomic bombs ended the war with Japan, WWII was officially over. The subsequent agreements sorting the spoils resulted in two major world 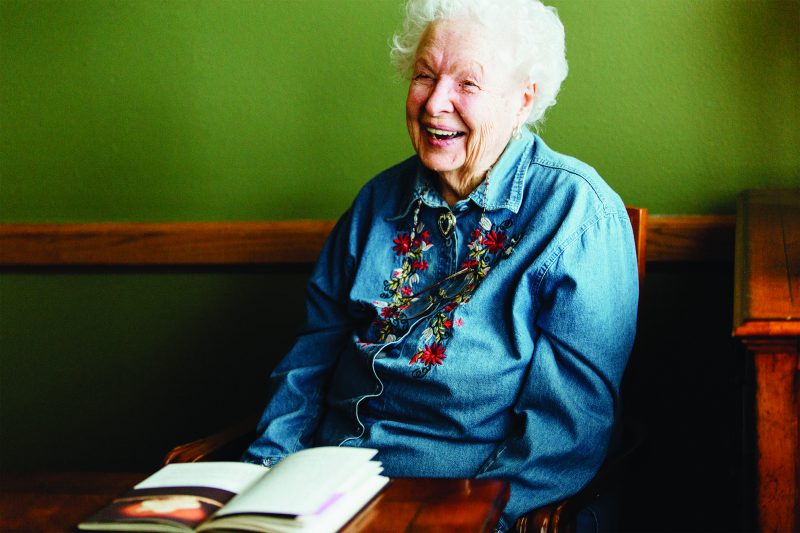 The Secret Life of Helen Yanuszka

How a Young Female Chemist was Part of the Manhattan Project

Text by Polly Kolstad and Photography by Sara Young

“I try to begin with a quote,” said Helen Yanuszka. “What would I say?”

“Oscar Wilde, ‘the mind is a diary of memories, some fade, not like a writing, that you can tear out of a page.'”

Yanuszka’s thoughts, calculated and collected, have hardly dimmed even into her nineties. She’s a quiet headliner in her own right, though not an open book, until she verbally pages through decades of her life. And then, there is no shortage of source material especially when she recalls the 1940s; that part of her work was so concealed, even she didn’t know what she was doing.

Her “nuggets of the past” are compelling.

She knew the slogan: “Loose lips, sink ships,” which indicated there was no conversing about your employment experience or what you did.