The gender pay equity gap affects households, not just women. Family-friendly benefits and flexibility are just as important to millennials as higher salaries. In Montana’s agricultural economy, at least one paycheck from a side gig balances out the risk of a bad crop year. Paycheck fairness is increasingly a gender-neutral proposition. 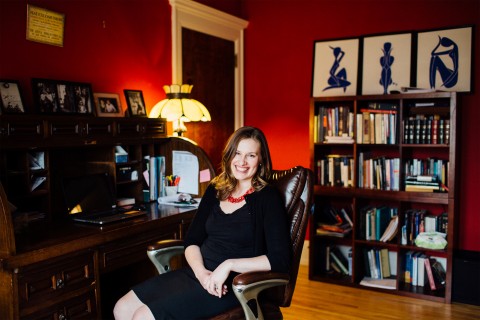 Liz Palla gets an early start each day in her home office. With her East Coast colleagues two hours ahead, she can jumpstart her to-do list and free up her late afternoons for family time.

Liz Palla rejoiced when she landed a telecommuting position with a strategic consulting firm serving foundations and charities. She found the golden ticket at just the right time. Her husband, Brendan, was re-entering the workforce after completing a Ph.D., so it was likely they would be moving from New York City. Happily for the University of Great Falls, the Pallas and their two little boys relocated in 2013, five months after she started her new job.

But the perfect job came with a hefty price tag—a $20,000 pay cut. Regional pay differentials are only one element of the gender pay gap, says Laura Wight, a volunteer instructor for wage negotiation seminars sponsored by the American Association of University Women (AAUW). Salary variations based on experience, skillset, and region can account for over half of the pay gap. However, scores of studies point to gender differences when negotiating salaries, and the negative impact of freelancing and part-time work on longterm earnings for women.1

Millennial men and women are committed to equal pay as a family issue, not just a gender pay issue. The younger generation is far more likely to advocate for fair pay, not to mention family-friendly benefits. In Montana’s agricultural economy, at least one paycheck from a side gig balances out the risk of a bad crop year. Paycheck fairness matters to the entire household. 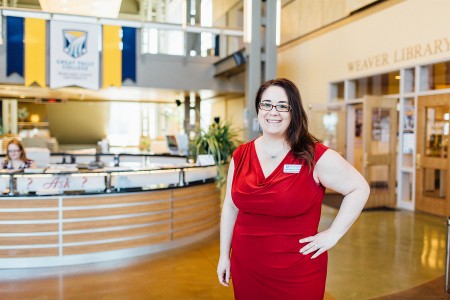 Laura Wight poses in front of the library at Great Falls College MSU, where she is director of e-learning and library services. As a member of the American Association of University Women, she is a trained “Smart Start” ® wage negotiation coach.

“The most important thing we teach in our seminar is how to benchmark your salary offer by region and experience,” asserts Wight. “Socially and psychologically, women tend to be passive and accepting, just grateful to have an offer.” Pay raises and promotions build on that initial rate at the point of hire. And, if a women takes a lower salary in exchange for part-time or flexible hours, the pay gap just grows as the salary history plateaus or even falls due to the tax burden of self-employment. By retirement, women receive 58 cents for every dollar men receive in retirement benefits.2

The workaday numbers are sobering in Montana. We rank 37th in a comparison of pay equity gaps among the 50 states.3 Women in Montana receive 67.5% of the median earnings of men across the state, compared to the national pay gap of 79%.4 Because overall household income has been stagnant since 2007, the pay gap between younger men and women has narrowed.5 In Montana, median household income overall is $7,000 per year less than the national average.6 Those lost wages limit career choices and decrease incentives to stay in the workforce.

Palla’s experience is unique, but telecommuting is not. Montana has the highest percentage of telecommuters in the nation at 7.1% (about 30,000 jobs).7 No employer should be expected to pay a Manhattan premium for work in Big Sky country. However, fair pay and smart, goal-oriented management attract the best and the brightest. When childcare options and paltry pay don’t add up, the workers just opt out. 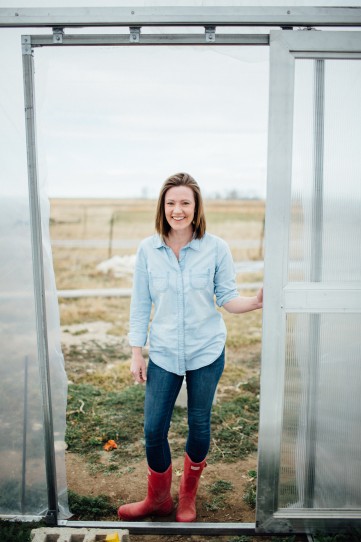 Courtney Cowgill needs her boots and her books at Prairie Heritage Farm, where, like many farm women, she manages everything from daily chores to business strategy.

Although she didn’t have a wage seminar to help her negotiate, Courtney Cowgill says her best salary was her first. “And it had great benefits, too,” she says, ruefully. But the call to return to her farming roots was too strong. She operates Prairie Heritage Farm with her husband Jacob, selling organic vegetables and grains to restaurants and consumers. And contrary to stereotypes, their farm partnership is 100% egalitarian. “We sell bread at the farmer’s market and people always assume that I’m the baker. But, Jacob’s the one who bakes the bread,” laughs Courtney.

To subsidize the bottom line, both juggle multiple full-time, part-time, seasonal and freelance jobs. Jacob has worked for the federal government, but now farms fulltime and serves as a substitute mail carrier and a lobbyist in Helena. Courtney has a steady editing gig, teaches online courses for the University of Montana and oversees a student journalism program when the legislature is in session. It all makes for some long days. “I was up until midnight last night after the kids went to bed,” she admits. “There are days when that doesn’t seem sustainable to me. But, most days I see that there is immense value in the kind of life we have built.”

The Cowgills point to healthcare benefits and childcare as pressure points for young families, especially in remote areas. “Debt of all kinds does factor into our financial choices,” she reminds. “Freelancers don’t get maternity leave, and neither do farmers.” Smart businesses can harness tremendous talent and loyalty by leveraging both benefits and flexibility for both urban and rural workers.

Liz Palla just completed her third year telecommuting, and added a third child last year as well. Based on her strong performance, she now supervises several other employees, virtually. “A pay cut is a pay cut,” she acknowledges. “But, my salary is now back where it was before we moved,” she continues. “Women are more likely to reward flexibility with hard work and loyalty. They appreciate it and work their butts off for you.”