A Montana Name Everyone Knew 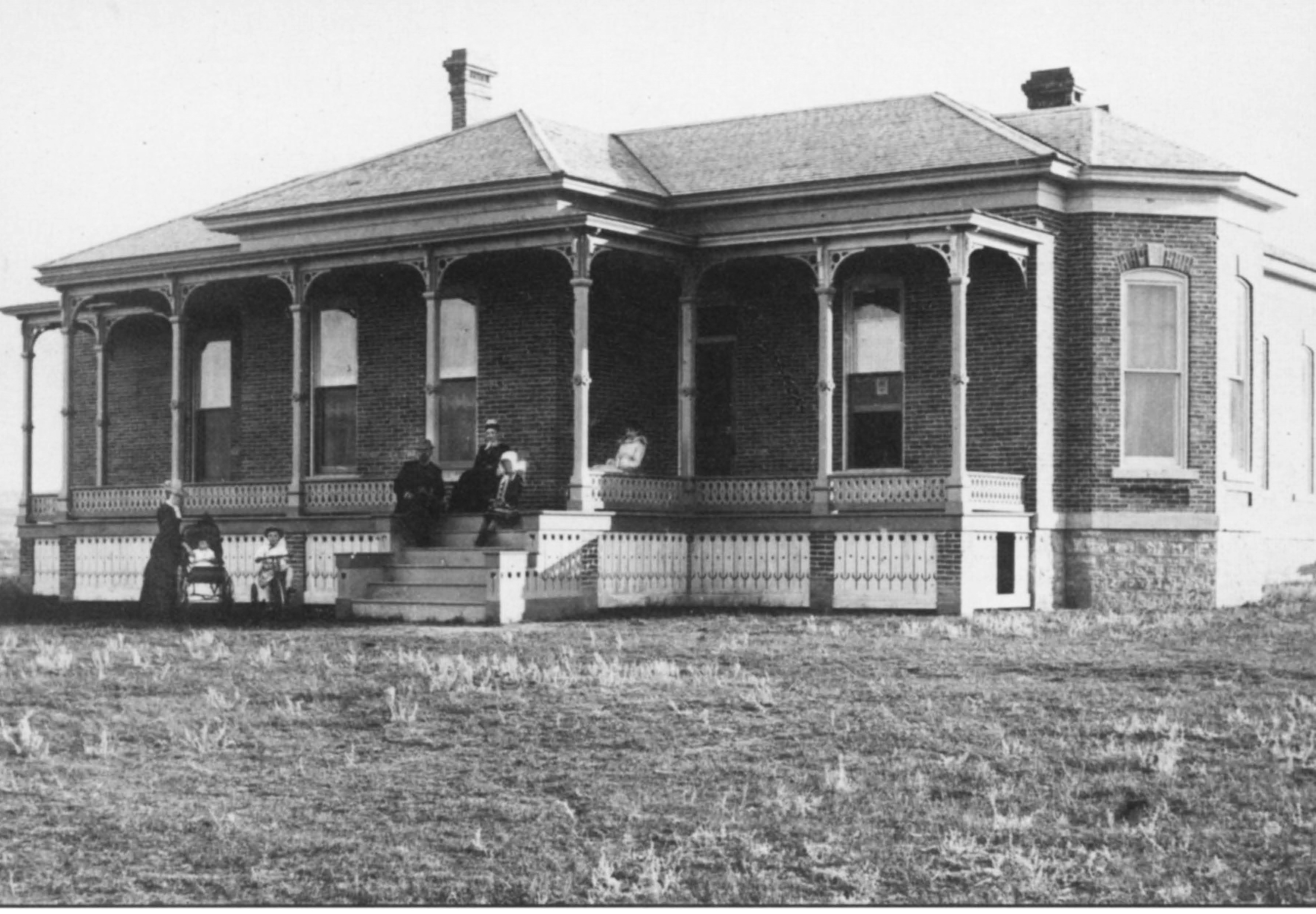 Unlike other well-known pioneers of north central Montana, Charles A. Broadwater was never the object of satirical remarks in regional newspapers. He was even called colonel by everyone, not because he had been a colonel in the military but because he had earned this Southern title out of courtesy from others. His parents had been part of the Virginia aristocracy. The soil on their plantation had played out over the years, forcing Broadwater’s father to leave the land of his heritage and to purchase a cotton plantation (some biographers called it a rocky farm) near St. Louis, Missouri, where Broadwater was born. 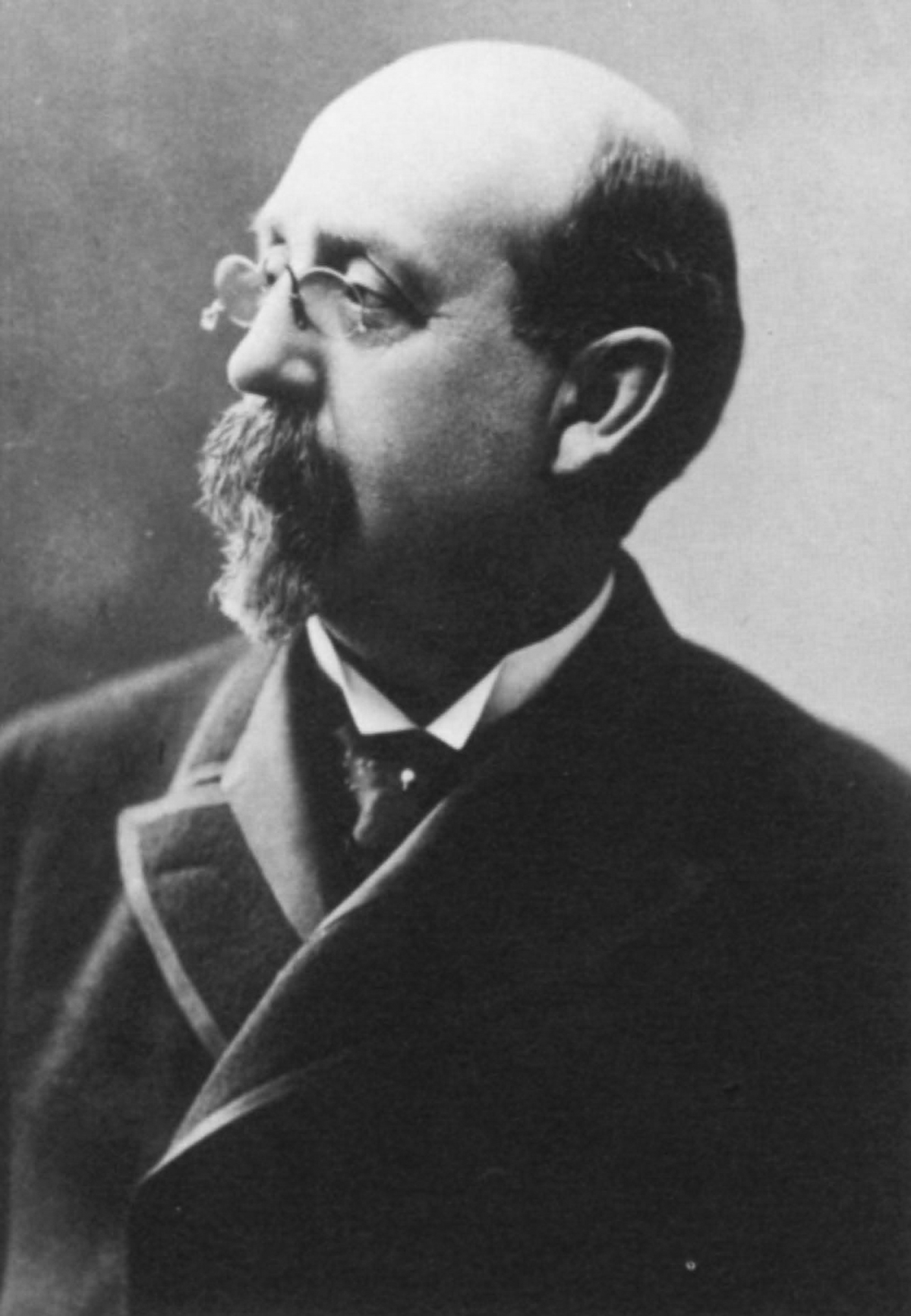 Charles A. Broadwater in about 1885. Photography by Taylor, Helena, MHS Photograph Archives

When he was sixteen years old, Broadwater left school and worked in a large St. Louis mercantile house. Although he received a business background there, this kind of work was too confining for the adventure- some young man. He headed for the gold fields out West in 1862 and ended up in Bannack and Virginia City.
Choosing to make a living other than in placer mining, he and John S. Pemberton struck out into Blackfeet country that fall. Although dangerous because the Blackfeet hated white men, the two found a large camp, boldly rode in, and negotiated the sale of a large number of horses. Driving the horses south, they were struck by a blizzard. Continuing to push forward in the most adverse conditions, they lost many of the horses but finally ended up near Warm Springs Creek where they spent the remainder of the winter. In 1863, He and Pemberton, who later settled in the Deer Lodge Valley, laid out a town they called Cottonwood, where Deer Lodge stands today. One winter day two fellows, Moore and Reeves, who had been exiled from Virginia City by the vigilantes, showed up and built a wickiup that provided almost no protection from the weather. Moore fell sick and would have died except that Broadwater took him in and nursed him back to health. In the future, that kindness was to be a life saver for Broadwater too. The next spring Broadwater bought up cattle in the Deer Lodge valley and drove them to Bannack to sell. Getting ready to return to the Deer Lodge valley with close to $5000 worth of gold dust in his waist belt, Broadwater was stopped on the street by Moore, who had been allowed back into Bannack. He told Broadwater not to tell anyone when he was leaving town because road agents knew of the fortune hew as carrying. “They are planning on robbing and killing you,” Moore said. Broadwater left town that evening and rode until early hours of the morning when he made camp and allowed his horse to rest. He fastened the rope tied to his horse to his wrist, laid down on the grass, and went to sleep. A pull on his wrist awakened him. Lying very still, he saw an Indian crawling on the ground toward him. Broadwater took aim with his rifle and shot the Indian. The Indian rose up from being wounded and ran into the brush. Later Broadwater rode into the Deer Lodge valley and was beginning to feel safe. Rounding a curve in the trail, he came onto the camp fire of Cooper and Ives, known to be the toughest road agents in Montana. Since he knew them, they acted glad to see him and said they would ride to Deer Lodge with him. To his advantage, they were not saddled up and their horses were grazing afield. He told them that since his horse was tired, he would walk on, but they could catch up with him. As soon as he was out of sight, he spurred his horse into a run to a settler’s cabin twenty miles away with the two of them racing behind him. His horse was so tired that it dropped when he arrived. By that time, the two road agents were only 150 yards behind. Again everyone acted as if they had a friendly race. Ives volunteered make flapjacks for breakfast, bragging that he was an expert. Broadwater went out with the settler to check the stock, and it was then that Broadwater was able to explain his dilemma. The settler sold his fastest horse to Broadwater and told him to leave right then. Ives and Cooper rode into Deer Lodge five hours after Broadwater had safely arrived among friends. Broadwater had been saved by Moore’s warning and Ives’ pride in cooking flapjacks.
Broadwater’s next occupation was working for a freighting company. Through a change of owners, he became superintendent of Nick Wall’s freight company, the Diamond R. In 1866, Broadwater, Matt Carroll, George Steele, and E. G. Maclay bought up the company and made it the largest freighting concern in the West. Many acclaim that it figured in the development of Montana. As superintendent, Broadwater was good at making certain that customers received their shipments on time.
From traveling the state in his occupation, Broadwater became well acquainted with army personnel. He also became acquainted with Amherst H. Wilder, a St. Paul entrepreneur who had contracts with the military. When Fort Assinniboine and Fort Mag- innis were established in the 1870’s, Broadwater, through the association of Wilder, was able to secure the contracts for furnishing all of the construction materials for Fort Assinniboine as well as the contract for running the trading posts at both forts. Broadwater lived and worked at Fort Assinniboine near Havre and his nephew, Thomas A. Marlow, was one of the post traders at Fort Maginnis near Lewistown. 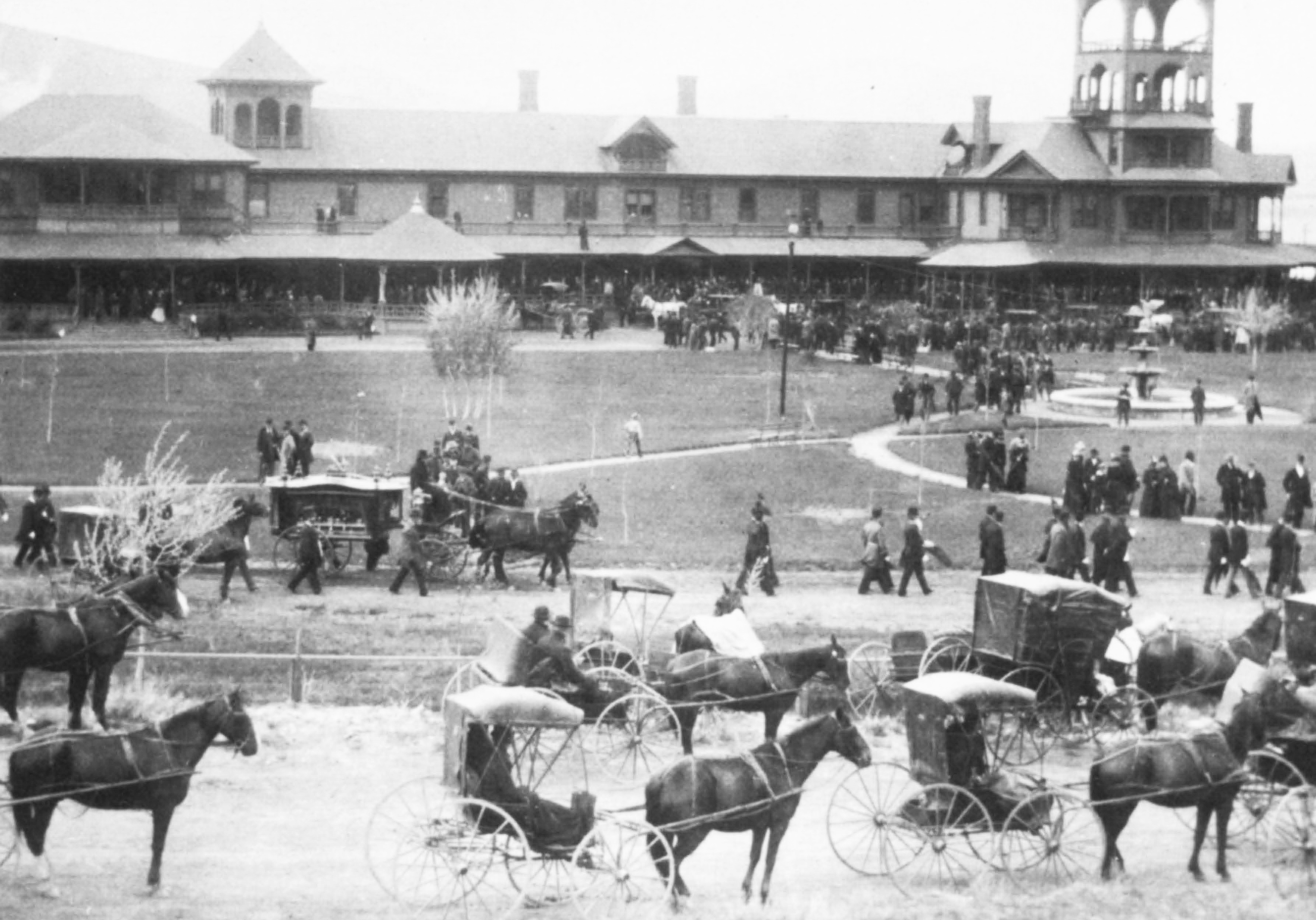 On May 29, 1892, over five thousand people gathered at the Broadwater Springs Hotel to attend Broadwater’s funeral, one of the largest ever held in Montana. Photo provided by MHS Photograph Archives

When railroads came in and forced freight businesses using oxen and mules out of business, Broadwater turned to other sources of income. A spur line needed to be built from the mines in Butte to the mills run by water power in Great Falls. Railroad magnet, James J Hill, recruited Broadwater, whom he met through Wilder, to be president in charge of building and operating the Montana Central Railroad, a job he did with skill.
While he was doing that, he also invested in a silver mine in Neihart; became the first president and a major investor of the Great Falls Water-Power and Townsite Company; was named president of the Great Falls’ First Na- tional Bank, and also was president of theSandCouleeCoalCompany. He started Montana National Bank in Hel- ena with financial backing of Wilder. With this wealth and friends through- out the state, Broadwater was consid- ered one of the state’s Democratic Party big four, along with Marcus Daly, Sam Hauser, and William Clark. In 1873, Broadwater married Julie Chumasero, whose father was a Helena judge and a strong Republican, in a lavish wedding . Those giving gifts were the “Who’s Who” in Montana at the time. They lived at Fort Assinniboine, but later made a permanent home in Helena. They had two children, Charles C. Broadwater and Antoniette Wilder Broadwater. Broadwater will be most remembered for his foray into the tourist industry. He held eighty acres of land to the west of Helena that had both hot and cold water springs. In the late 1880’s he took on building a lavish resort hotel and natatorium that became the largest indoor swimming pool in the world. At one end of the pool were two waterfalls, one from the cold springs and one from the hot springs. Lighted by electricity, at night the natatorium “glistened like a jewel box.” Broadwater thought well-heeled clientele would come from throughout the country on the railroads. They would visit Glacier and Yellowstone Parks and stop at the hotel enroute. But the hotel was too isolated, and the resort gradually fell to disuse.
Although only fifty-two years of age, Broadwater’s body grew tired from all of the energy he had expended over the years. His doctors told him that he had a smoker’s heart. He tried an overseas trip and then a stay on the east coast, only to contract influenza. Upon returning home, he died in Helena on May 24, 1892. To transport the five thousand people who attended his memorial service, additional trains from Butte, Billings, and Great Falls were scheduled. At Broadwater’s untimely death, many of his projects were unfinished and needed someone with energy and busi- ness sense to continue them to fruition. Broadwater’s nephew, Marlow, took on the job and was fairly successful. 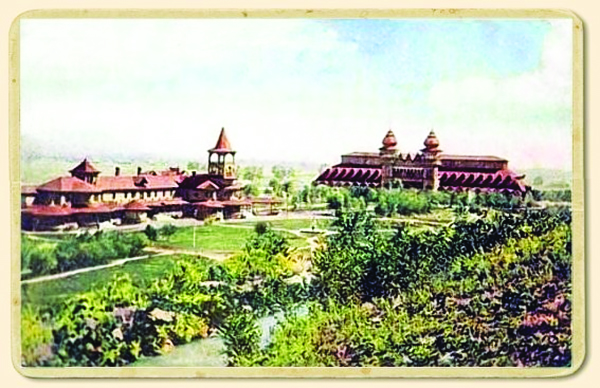 Postcard of the Broadwater Hotel and Swimming Pool Building. Courtesy of History Museum

Only with the name of the county of which Townsend is the county seat is C. A. Broadwater remembered today. Gone is the Neihart mine where over two million dollars of silver was extracted. Torn down is the lavish Helena hotel and natatorium. But the people of Great Falls celebrate his interest and investment in a new community—one that he thought had a bright future. It is unlikely Broadwater Bay in Great Falls was named for the early pioneer, C. A. Broadwater.  Even  before a board that named the parks was created, the term, Broadwater Bay, was being used in newspaper articles in the 1880s to identify the quiet, wide expanse of the Missouri River located west of downtown.

By 1894 the mayor and the newly formed Park Board Commission had started looking for tracts of land that would become parks.  A designated piece of property identified as Sun River Tracts and, at that time, located outside the city limits was sold to the city in two parcels by David Thomas and James Chambers in 1890 and 1894 respectively.  Becoming one parcel of land, it had extensive frontage on the Sun River.

This area was to be named Broadwater Park to honor C. A. Broadwater, “Montana’s most illustrious citizen and a warm friend and believer in the destiny of Great Falls.”